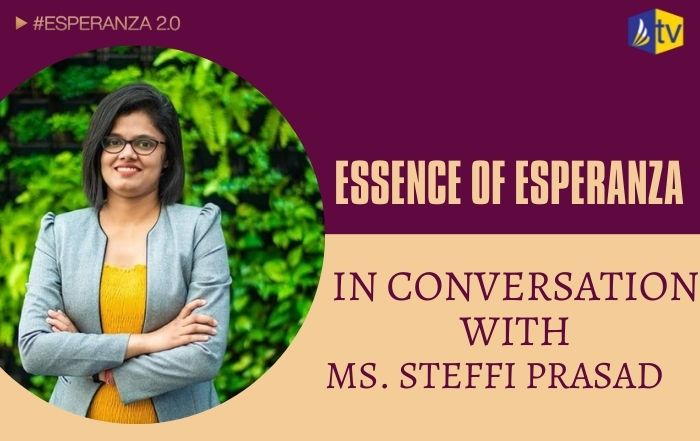 The Essence of Esperanza

The Essence of Esperanza

In conversation with Ms. Steffi Prasad

“Experience, is a feeling that’s peace and contentment about doing something that is the need of the hour,” Steffi Prasad, Event Coordinator and Asst. Professor at Inspiria Knowledge Campus.

Esperanza undoubtedly is all about igniting hope within the restless souls and lending a hand towards a noble cause. Being a part of the event is all about coming together and uniting in this time of uncertainty with a hope for a better tomorrow and Steffi Prasad, President and one of the coordinators of the event would agree with us on this one!  she had joined us for a fun conversation to give more detailed insights about Esperanza.

When asked about the idea of hosting Esperanza, “to break the myth of students that are online not being impactful and to have a hands-on experience of hosting an event on their own and impact being the reason of intention with a hope to support all negatively affected during the pandemic to spread Esperanza with them” is what she had to say. Her idea of hosting the event and donating the funds raised to Charitable Trust was our Student Rhittick Das (VP Inspiria TV, TL Public Relations then) idea. To unite the students of India to be a source of hope for the nation during the grave crisis was the sole idea behind organizing this event. Naming the event Esperanza and not any other was because Esperanza means hope and this pandemic has been making everyone feel hopeless. So, e-media festivals bring back the importance of information, awareness and entertainment in the lives of young people. She added, Rhittick, who was the tech master for the event last year, handled all the pressure as it was hosted online, everything was done with no physical interaction, judges, speakers and participants joined us online on zoom and opted for Facebook live.

Students’ efforts and intention to unite India and unleash talent during a time in the world going through hopelessness is what makes Esperanza unique, she said. Getting no response from the colleges as they were closed, but the unstoppable attitude of the students made Esperanza possible, she added further.

Speaking about last year’s event, the Esperanza team received 36 positive responses from colleges all over India. But organizing a nationwide event is not as easy as it seems, to get the responses from various organizations the whole team had to work very hard and therefore talking about the team experience and research procedure Ms. Steffi said, “The research team was the backbone of Esperanza. Listing and connecting with closed institutions that had phones ringing but nobody there to respond was a heartbreaking experience. But never back down, the attitude of our students made it through 36 esteemed colleges across India.”

Last year, media students of Inspiria knowledge campus conducted for the very first time the event under the wing of Inspiria Tv, which was a wonderful experience for the students organizing it as well as participating in it. But the idea of conducting an event on such a large scale was a little challenging in the first place, therefore the event was only limited to the colleges all over India. But after the success of last year’s event, this year the team of Esperanza has come back with Esperanza 2.0, which has much more enthusiasm, much more exciting and is open for students all over India, both schools ( 9th – 12th standards) and colleges, with their aim remaining the same of uniting students and unleashing talent. As mentioned earlier, Esperanza was an online event conducted on ZOOM, and judges, as well as participants, were more than willing to be a part of this noble cause last year. So much so that they have agreed to volunteer with us for this year’s event as well.

When asked about defining the overall journey of organizing and hosting the event in a single word, she said-

Esperanza (with a smile 😁)