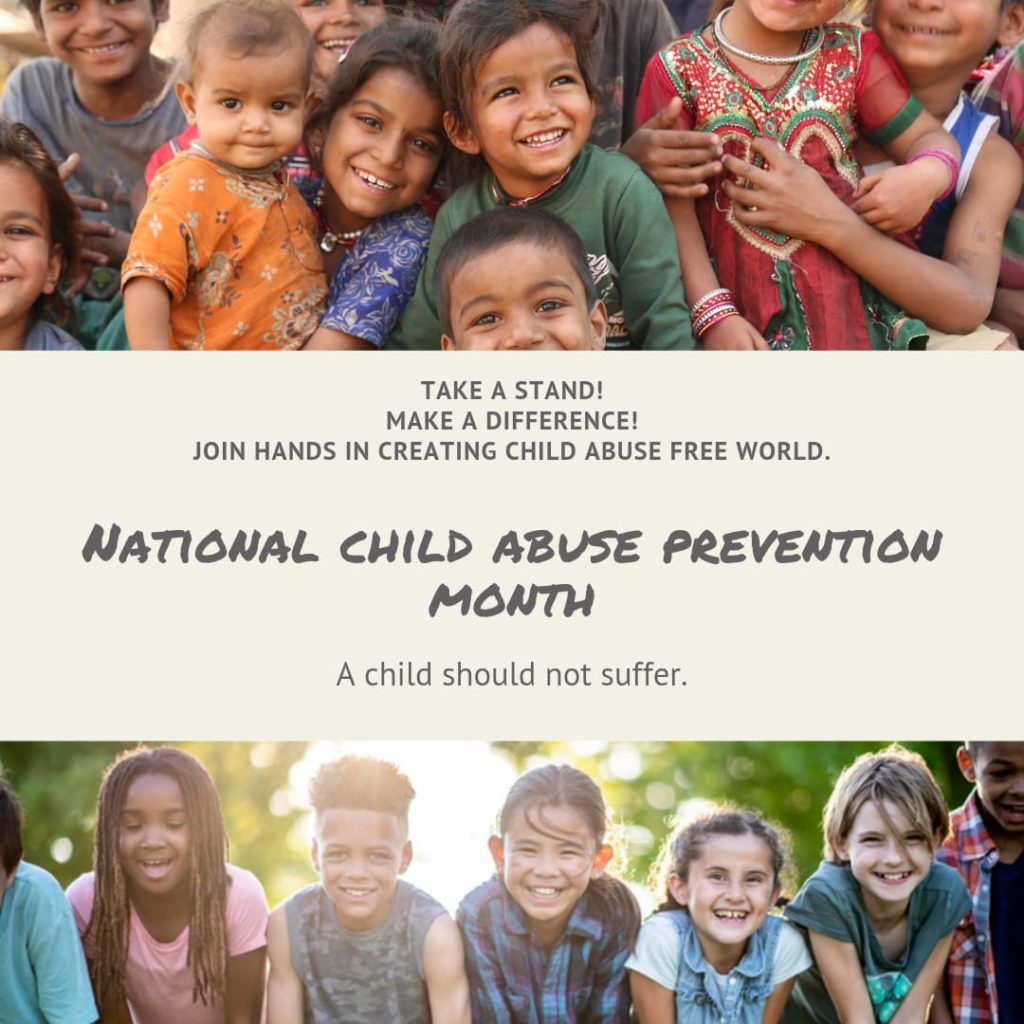 The Month April holds the title as the month of National Child Abuse Prevention. It is observed in order to appreciate the efforts various communities, families, and individuals have put in to bring this issue into the light and are constantly working towards eradicating the problem. A child who has gone through various forms of abuse has a very hard time coming out of the trauma and leading a normal life, hence leaving a life-long imprint. During the month of April, also throughout the year, every individual is encouraged to raise the issue of child abuse and play their part in making this world a better and safer place for children and families.

In India, many children go through this, sometimes physical, sexual, or even emotional, the target being the children of age group 5 to 12 who can be easily manipulated and exploited. Child Abuse also takes place in the form of ancient traditional “practices” and is often overlooked in the name of cultural practices.

FGM, the abbreviated form of Female Genital Mutilation, is common child abuse that the girl child goes through in Africa, the Middle East, few nations in Asia, and Latin America, disguised as a traditional practice. The girls are made to believe that FGM is a requirement for each and every girl and it makes them pure!! They are also taught by their community that their body is meant for physical pleasure and pleasure-seeking is a sin, leaving them to believe their body to be a curse!!! In the process, the female’s external genitalia are deliberately removed. Most of the time resulting in the removal of labia and clitoris. Overall, FGM is a very distressing process and it leaves the female to deal with problems like irregular periods and recurring infections. Apart from causing physical pain, FGM leaves a psychological impact upon the victim that she has to deal with throughout her life.

In India, this practice is carried out by some religious communities, where a girl’s rights are violated. When she reaches the age of 7, has to go through this practice. Untrained midwives continue to scar young lives. The sad and shocking fact about this abuse is that it’s inflicted upon the women by other women! Most of the girls are pushed towards this by their family themselves comes out as a piece of disquieting news.

Exploitation is another form of child abuse, often seen in the form of child labor and child prostitution. Many children have been forced to engage in unethical activities and other sexual violence. This leaves a dark stamp in the child’s psyche where they find it difficult to figure out at such a young age and often step down from voicing against the abuse, especially when the abuse is coming from one of the family members.

The consequences of any kind of abuse often end up damaging the child’s life, pushing the child towards depression, low self-esteem problems, and the inability to voice their opinions. It affects the child physically, mentally, and emotionally.

The Government too has been quite active in eradicating this problem by bringing in force special laws that deal with Child Sexual Abuse cases. POCSO Act 2012, abbreviated form of  Protection of Children from Sexual Offences, is an act that was implemented to monitor the child abuse cases and act on such cases. The Act defines a child as any person below 18 years of age. The act is gender-neutral as it recognized the fact that the boys too can be the victim and it increased the scope for reporting against child sexual crime. The Act thus incorporated non-penetrative sexual assault as well as aggravated penetrative sexual assault. According to the reports of the National Crime Record Bureau (NCRB) as per the year 2019, the crime rate registered per lakh children was 33.2 in 2019 and 31.2% of the cases of crimes against children were registered under POCSO Act and in 94% of the cases, the offender was known to the victim. Among the Metropolitan cities, Delhi got the tag of the city with a high crime against children in the year 2019 with a total of 7565 crime cases against children.

Child Abuse must be prevented at any cost and to do so below are few preventive measures that one can go for:

.    Voice out against any child abuse that you witness instead of overlooking it.

Let’s come together for the same cause.