On August 25, indulge yourself with a banana split, a delicious ice cream-based dessert, as the National Banana Split Day is celebrated on this date.

Did you know the story about the burglar, who broke open a house one dark night and was enticed by a dessert- “Banana split”, displayed on the dining table? He was engaged in devouring the dessert and  forgot what he came for. Of course, he was caught by the owner of the house.

In 1904 banana split was invented by David Evans Stricklerm from Pennsylvania, who was an apprentice pharmacist, much absorbed in making sundaes. Initially it was sold for 10 cents. Walgreen drug stores actually popularized the banana split and the dessert became synonymous with their store. Thus came the vogue of celebrating the National Banana Split day henceforth. 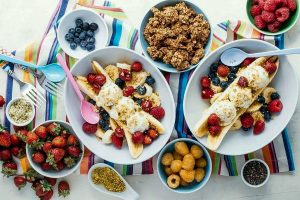 The city of Latrobe at Pennsylvania celebrates the annual banana split festival on August 25 every year. Bananas, it must be noted contain tryptophan, which is a mood enhancer, hence called a happy fruit. It also contains vitamin B, which is said to soothe the nerves.

Do enjoy your day with a Banana Split Sundae but for the people who are calorie conscious, a single banana split can be an uptake of 1,000 calories and pack more than 30 grams of fat. Hence, moderation is the key. Instead of using three scoops of ice cream, consider ordering a sundae with just one scoop.

Finally we have a fond recollection of Dunston in the movie Dunston Checks In (1996) who used to swallow whole bananas for his so-called ‘potassium deficiency’. However it can be concluded by saying that not having a banana on this day will definitely make us deficient of some sorts.