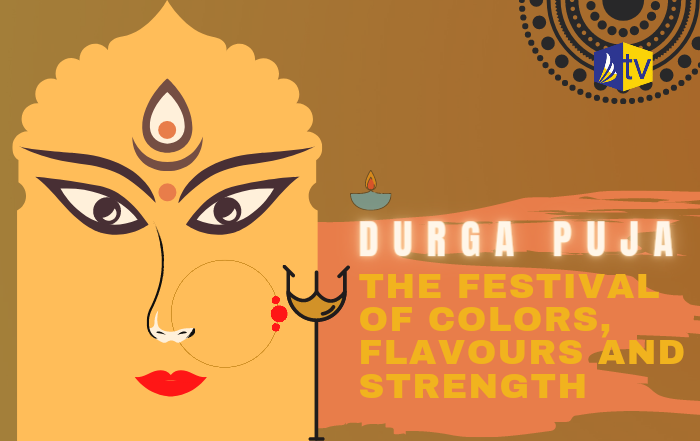 If we go deep into reading mythologies it has always shown that whenever there is a rise in negative energy a positive power is born to restore faith and prosperity. Rise of power with the capacity to define what’s wrong and what’s right and to reset the cycle of construction and destruction. Devi Durga is one such power who is adorned with powers from numerous gods and goddesses and possesses the third eye in foreseeing the results of choices. Devi Durga also considered as the epitome of female power and strength is also known by the name shakti which means the unconquerable force. She is also known as the purest root cause of creation, maintenance and destruction. As per Shiva Purana Devi, Durga is believed to have evolved from the left half of lord shiva, with the help of which he created shivaloka. It was after the demonic son of Rambha named Mahisasur created havoc on earth and defeated all the gods of heaven, lord Vishnu discharged a huge mass of light from his mouth that merged into the similar rays emitted from the mouth of those gods. The powerful light morphed into the powerful deity called Durga who challenged mahishasura for the battle. She defeated the whole army of Mahisasur at once. Goddess Durga is honoured with devotion during the time of Durga puja in her nine divine forms, where each form is worshipped in each night of Durga puja also termed as Navratri. And these nine forms of Devi Durga are:

Shailaputri (daughter of Himalayas), Brahmacharini( following celibacy), Chandraghanta(having moon in her necklace), Khushmanda (being the creator of the universe), Skandamata (mother of Kartikeya born out of her powers), Katyani (daughter of sage Katyana), Kal Ratri (kali), Mahagauri (wife of Lord Shiva) and Siddharthi (blessings and mystical power).

Durga puja falls in the month of September-October but it was originally believed to be celebrated in the month of March-April. According to a story mentioned in Krittibas Ramayana, it is believed that after Sita was abducted by Ravana, Lord Rama with his monkey army went to battle with Ravana. In the midst of battle, Rama performed a puja to invoke Devi Durga and seek her blessings. Rama started the puja on the sixth day of the month of Ashwin and Devi appeared in front of him between the meeting point of the eighth and ninth day of Ashwin. And finally, Ravan was defeated on the tenth day. Therefore this untimely awakening of Goddess Durga is known as “Akal-bodhon”. Therefore the ritual of burning the statue of Ravan on the tenth day of Durga puja is observed.

Food is also an integral part of Indian festive culture. The mouth-watering satwik (pure vegetarian) cuisine during the Nav Ratri to the flavourful ‘Bhoger khichuri’ on Ashtami are worthy of mention. The entire festive cuisine includes sweets, snacks, savoury, desserts, fruit salads with a touch of traditional cuisine.

1. Goddess Durga: goddess Durga has received her features from various gods like her face from lord shiva, her ten arms from lord Vishnu and her feet from Lord Brahma. They also gave her weapons such as trident, conch, thunderbolt, sword, and spear and decked her up in warrior armour and jewels. The god of the mighty mountains gave her the lion to ride with a thunderous roar.

2. Devi paksha: Devi paksha (fortnight of the Goddess) exists during this phase. It marks the end of ‘Pitri Paksha’ which is dedicated to deceased forefathers. It is said that Maa Durga along with her children starts her journey towards the earth on the first day of the Devi Paksha period.

3. Soil from Nishiddho Palli: The soil from the forbidden territories is considered to be highly pure as known as Punya maati. To make Goddess Durga’s idol this pure soil is begged from a brothel and is used in carving the idol.

4. Preparations of Kola Bou: ‘Kola Bou’ or the tree bride, more popularly known as Lord Ganesha’s wife, is prepared by adorning a banana plant. On Saptami, the seventh day of Durga puja, Kola Bou is bathed in the morning as a part of rituals and placed on the right side of Maa Durga’s son, Ganesha.

5. Forms of idols: Various forms of Pratima or idols are available in the market during Durga Puja. The oldest and most conservative form is known as ‘Daker Saaj’. Imported beaten silver from Germany was used for decorating the idol. Since it was delivered by the postal service or ‘Daak’ it uses the name Daker Saaj.

Devi Durga also called maa Durga is the source of selfless love and care with unrivalled powers and strength. In India, every mother is seen as a form of Devi Durga because of her immense love and her strength which she shows whenever her child is in danger.

Inspiria TV salutes this power of the Indian mother which she shows through her entire lifetime and also wishes everyone a happy and safe Durga puja.

Let’s celebrate this Durga Puja with an unbound positivity to defeat the gloom of pandemic. Stay at home and have a great festive time with your near and dear ones.