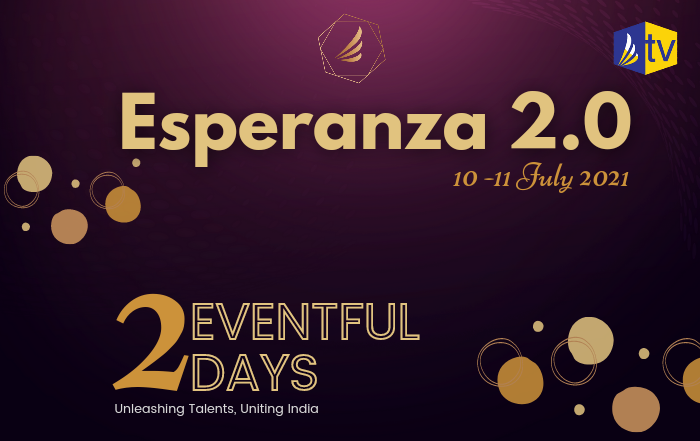 Since the last one and a half year, the whole nation has been traumatized by an invisible deadly virus, and various people as well as organizations are coming forward in order to help those who have been affected by the coronavirus. The media students of Inspiria Knowledge Campus under the wing of Inspiria Tv also contributed to this cause through organising a two day nationwide fundraising event with hope of uniting students and unleashing talent within India. The event was organised on 10th and 11th of july via online platform. The past month has been a blast for Inspiria tv, as all the members were preparing for the second version  India’s largest e-media fest Esperanza 2.0, which turned out to be quite a success and a ray of satisfaction was visible  in everyone’s face. The event Esperanza was initiated last year with an aim to become a silver lining to these dark times where everyone is battling the wrath of coronavirus, which was successfully carried for the second time this year. The event was a fundraising campaign and the fund generated from this event is donated to the people who were suffering from hardships of coronavirus. The word “esperanza”is of spanish origin which translated in english means hope. And through Esperanza we the members of Inspiria Tv hoped to become a beacon of light in these tough times.

But the event wouldn’t have been a success without all the talented participants and esteemed judges who joined us to be part of this great event.  Below mentioned are the names of judges who became the part of Esperanza and also guided various students towards the path they wish to be a part of.

Anirban Bhattacharyya– yes, Anirban Bhattacharyya a bestselling author ,a stand up comedian at The Comedy Store in Mumbai from 2011. Since then he has toured all over the country with his solo show Don’t Mess With The Bong and now he is the co-creator and producer of one of India’s most popular crime shows on television called Savdhaan India on Life OK which has subsequently been branded as Star Bharat. He was also a producer in crime patrol, Fear files, True life and many more.

Tirtha Dasgupta- A reputed photographer and the founder and Director of a photography school Fototechnik .Dasgupta’s passion not only inspired him to take brilliant photographs but it also transformed him into a revered teacher of photography.

Bharat Bhushan– Editor of brut india. Editor of Catch News, Bharat has been a hack for 25 years. also worked as an editor in Mail Today, Executive Editor of the Hindustan Times, Editor of The Telegraph and many more.

Gouri Nilakantan Mehta– She is a well reputed Direct of PACT (Platform for Action in Creative Theater) which is a platform for potential theater actors and directors in India and a realm of opportunities.

Nandagopal Rajan– He is a Media Editor at IndianExpress

Lydia Walters– A very common name among the youngsters and the winner of Amazon prime’s reality show skulls and roses, and an aspiring model and anchor.

Debojyoti Dhara- Debojyoti Dhara is an amazing artist from Bengal.Several objects are portrayed in his artwork which tend to reflect the presence of obsession in this world. His brush makes a paper into a life.

Harsh Agarwal– Now here comes the idol for all those aspiring bloggers, poets or writers Harsh Agarwal. Founder of ShoutMeLoud who taught us the magic of writing and  blogging can do wonders.

Abhishek Chatterjee– Abhishek is a VFX specialist at yashraj studios, who’s work of hand can make any green screen to anything wonderful. He spent his 9 years in Media houses and we are looking forward to getting more amazing works done by him.

Abhiman Roy– Abhiman is a singer, Indian film score and soundtrack composer. He predominantly scored music for Kannada films. So all music lovers and participants get ready to welcome him for a melodious evening.

We were more than honoured to welcome them as our judges, the session was indeed fun and inspiring. The whole Inspiria Tv team is grateful to all the members, participants, judges and audience who joined us to become a part of this event. But fear not, those who miss the event can still watch it on the facebook page and youtube channel of Inspiria Tv.