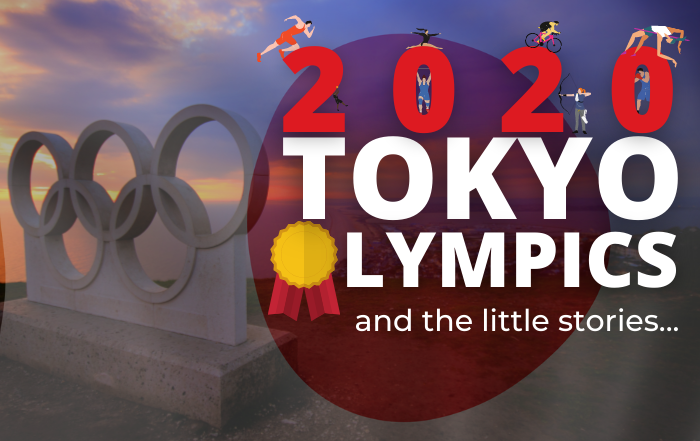 TOKYO OLYMPICS 2020 ~and the little stories

Olympics, the grandest festival of sports and the biggest sporting spectacle across the globe.

The name itself holds the hearts of a million sports spirits. This event is often considered to be the dream destination of every person who holds a keen interest in the field of Sports.

However, due to the ongoing pandemic, the “Tokyo Olympics” could not happen as scheduled in 2020. It was a huge disappointment for the sports personalities who had worked really hard to get there. It was not possible to conduct such an international event while the world was going through a serious crisis.

But on the positive side, “Tokyo Olympics 2020” is currently happening in the capital of Japan. The world is rapt at the event going on.

India has always been a country that respected as well as encouraging sports. Be it in ancient times or the modern. This nation has been creating and raising amazing sports personalities who never stop making the nation proud of them.

With the involvement of sports as a subject in schools and educational institutions, India has been able to apprise people of the significance of sports.

Nevertheless, India has raised several phenomenal sports personalities. From Late Milkha Singh (known as The Flying Sikh) who made a big name in the field of athletics to Mary Kom the lady with so much power who won the World Amateur Boxing Championship six times. Hima Das an athlete from Assam whose story we are all aware of and PV Sindhu and the names keep counting. All of these names have brought pride to the country with their hard work, strong will, and passion for sports and their respective fields.

It is an accepted fact that the Olympics brings out so many stories of people and their lives. One of them is Mirabai Chanu from the Tokyo Olympics 2020. She is an Indian Weightlifter from North East India from the state of Manipur. She has been raised in a small village Nongpok Kakching and since the age of 12 her family had found out the strength she carried in her. This pushed her towards the field of Weightlifting and by now she has won the silver medal in weightlifting in Tokyo Olympics 2020. Since then her story and her journey to this milestone have been spreading like a wildfire across the country as well as the globe.

Besides such stories of passion and strength, the most mesmerizing fact about Tokyo Olympics 2020 is that it is the first gender-balanced Olympics in history (billed by the International Olympics committee IOC)

“with nearly 49 % of the participating athletes being women. Apart from the volume, women are also shifting the balance of the spotlight towards them.” ~ .The Hindustan Times

Mirabai Chanu. Lovlina Borgohain. PV Sindhu. Ariarne Titmus. Katie Ledecky. Simone Biles. Naomi Osaka. Yui Ohashi. Tatjana Schoenmaker. Vivianne Miedema- All of these names are of the women Participants across the Globe that inspire and motivate a lot of children, Women, and even Men sitting and watching them out there. Seeing this, the jubilation can’t be explained!

While Mirabai Chanu took forward a legacy by bringing home a silver medal, the era of Mary Kom had to end with this. Mary Kom who lost against her Colombian opponent still wins the hearts of the nation with everything she has done for the nation throughout her lifetime. She will forever be an inspiration.

Meanwhile Simone Biles, a US gymnast who had made a record of being the first ever female gymnast to cleanly land a ‘triple double’, pulled out of the competition due to mental health issues. We cannot call her weak but strong enough to have taken such a major decision and prioritize Mental Health. Once again she proved to be a great leader by setting a true example towards everybody who feels pressured.

Few days ago talking about the pressure she had been through  she even made it to instagram and wrote “ i truly do feel  the weight of the world on my shoulders at times” this statement makes us realise the pressure one has while they do something for the country. Yet, Simone will truly be the greatest Gymnasts of all time.

Lastly and most importantly the Tokyo Olympics 2020 has stood out of the rest because of its justice with the LGBTQ Community.

More than 160 openly lesbian, gay, bisexual, transgender, and queer athletes are due to participate in the Tokyo 2020 Olympics, making this year’s Games the most inclusive ever ~ Times Of India

Japan is a country known for its strong democracy and civil society. It was a perplexing move made by the country during the Olympics. In fact Fumino Sugiyama, a transgender Activist is the first transgender person to be appointed to the Japanese Olympics Committee.

To stay updated about the ongoing games, Check out the link below:

All of these stories enlighten us as we come across them and push us in a way to be better than what we were.

From a village girl making a way to endless possibilities  to a woman prioritising mental health and to the LGBTQ finding a way in the field of sports.

These stories truly motivate us to be strong and choose for ourselves.

For  a year we probably hated,

Yet  the Olympics gave us the best.

Stay inspired and Never give up.