“I object to violence because when it appears to be good, the good is only temporary; the evil it does is permanent.”

2nd October, is celebrated as the International day of non-violence on the birthday of ‘The Father of the Nation’- Mahatma Gandhi. It was on 15th June, 2007, the United Nations General Assembly voted 2nd October to be declared as the International Day of Non-Violence and it’s a proud moment for any Indian. On this day the UN asks its members to commemorate “an appropriate manner and disseminate the message of non-violence, including through education and public awareness.”

Mahatma Gandhi, the leader who led India towards independence based on his principles of non-violence is known as its best practitioner till date.  He also inspired millions with his ideologies and principles including some nobel laureates and dignitaries and also the Nobel Prize-winning scientist Albert Einstein. His belief on non-violence and his social works are the sole reason for his widespread followers across the globe. The respect towards him and his principles can be truly unveiled through the gestures of our as well as the foreign nations. 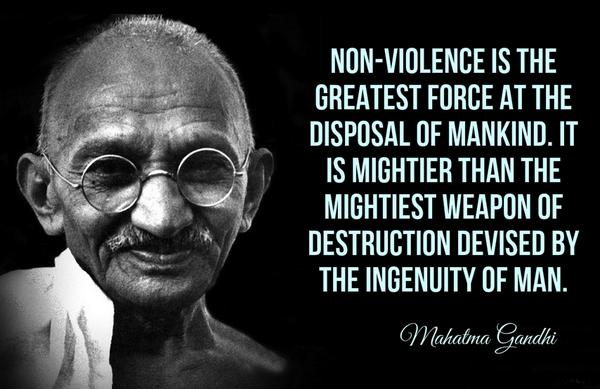 The day has its own importance and there are several ways on how we can pay tribute to the great leader for his contribution:

In this 21st century, amidst this tension among several nations, we should all try to serve all with an act of kindness and not take any haphazard decision because history is the witness to that violence has never led to anything productive. Bringing just incomparable devastation not only to property but also to the lives of the innocent; violence has witnessed numerous blood sheds and devastation of the human, animals and the environment. Violence in the form of war drains out the economy of the country staking the life of the entire countrymen.

There are many world leaders who followed on the same path and to name a few are Civil Rights activists Martin Luther King and Rosa Parks, humanitarian activist Harry Belafonte and the famous Nelson Mandela known for his anti-apartheid movement in South Africa. They are exemplary leaders who led their movements in a peaceful manner, yet were successful in their goals, keeping their people united and safe to an extent possible.

“There are many causes I would die for. There is not a single cause I would kill for.”– Mahatma Gandhi

What we do today will be reflected in the future and war takes no time to create a history. Our future and the society we would be living in depends on our present actions and decisions, therefore on this International Day of Non-Violence let us all start adapting ourselves towards much of communication and mutual establishments rather than imposing violence and raising conflicts, be it for any petty or a bigger matter.

Happy Birthday to The Father of The Nation and wishing all a Happy International Day of Non-Violence.

Say No to Violence!