How do you deal with OCD? 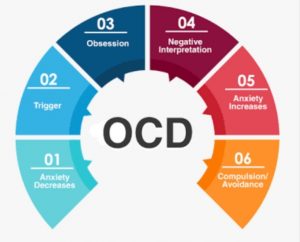 You might have met someone who remained obsessed with one or two issues in life to the point where he/she could not think of anything else. Time and again without context the person would recoil on the same topic. Indeed this writer knew a retired journalist, an otherwise nice man, who refused to stop shaving once he started. Every time he would finish with his razor, he would start foaming his face once again. This continued endlessly, until someone in most cases his wife intervened to force him towards the bathroom. Not many are aware that such behavior is due to an illness or rather a condition of the mind medically termed as OCD.

Obsessive-compulsive disorder (OCD) refers to a state of mind in which people remember some scenes or thoughts which recur time and again. These ideas or sensations turn into obsessions, which the mind cannot set aside. Such repetitive ideas become compulsion, craving unwanted attention. Suspicion about something or someone, recurring patterns of violent sexual behavior and especially the formation of thoughts in impulsive as well as compulsive manner fall under the domain of OCD. It may also imply a psychic disorder, when you are scared of contamination, hoarding disorder, fears of causing harm to others and arranging objects in specific ways. All such traits become cumulative and obsessive in such a manner that you can’t get rid of them at all and which compels you to behave in a certain way.

A glaring instance would be harping on the idea that any harm might occur to those whom you love. Or it might be that you are constantly obsessive about your sins, which require constant purgation. Such thoughts relax control over your mind and responses.

In many ways, science has discovered and implemented the use of cognitive behavioral therapy to deal with this type of mental disorder. It is wise to opt for CBT (Cognitive Emotional Behavioral Therapy) in groups to reduce tension and render the treatment more effectively. The other treatment prevalent is ERP (Exposure Response Prevention Therapy). The mind is exercised by exposure to those obsessions which plague it and inculcate confidence in dealing with such anxieties.

Exposure and Response Prevention (ERP) requires effort, practice in presence of family members or special friends. The third option may be ACT or Acceptance and Commitment Therapy. Although it is a relatively new mode of treatment, ACT is a novel break -through since it encourages the patient to accept his limitations as a part of his/ her by illustrating that anxiety is a part of life. Here practical experience teaches that in life acceptance of anxiety can enable us to develop new ways of responses. Hence the patient modifies his reactions to the problems which unsettles him/her.

Certain medications like antidepressants like Clomipramine, Fluroxene, Paroxetine or Sertraline may be prescribed by psychiatrists. The idea is to identify and control the symptoms of obsession by having recourse to drugs with lower potency. Initially antidepressants might be difficult to handle but in the long run they prove beneficial. In most cases patients might not respond to first line treatments. In such cases, deep brain stimulation may prove helpful in targeting specific circuits in the brain of patients to reduce feelings of anxiety. RTMS or Repetitive Transcranial Magnetic Stimulation may be resorted as an alternative option. However, such treatments are still in the nascent stage.

Another safe treatment would be relaxation techniques, involving visits to new places like hills and natural resorts, which offer an enervating experience and can motivate and strengthen the mind and alternatively dilute the anxieties in the mind.

OCD is commonly misunderstood as forms of anxiety which assault the mind but actually the crux of the problem lies in the perception that the mind loses its control over certain external symptoms. Initially, the mind must regain its strength by considering certain options. It is known that spatial memory might be affected by OCD. According to an article published in the Journal of the American Academy of Child and Adolescent Psychiatry (Vol. 37 Issue 4) by Martin E. Franklin, cognitive-behavioral treatment is effective in ameliorating OCD symptoms. According to this medical research journal, this treatment is also effective for pediatric OCD.

Memory is both verbal as well as non-verbal like certain images, which flash upon the mind. Indeed, OCD has been linked to deficits in spatial memory, such as recalling certain places on a map or the location as well as the size of a room within a building. We should cut down on sugar intake and use fish supplements to boost memory power. Getting enough sleep and healthy living, coupled with certain brain exercises as in meditation and choose anti-inflammatory foods to prevent cognitive decline.